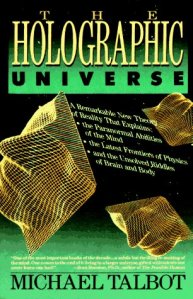 I’ve always held firmly to the idea that just because something you believe cannot be proven by science doesn’t mean you should change your mind about it.  But, I have to say that, occasionally, it’s nice to get some confirmation from the scientists. This is one of those times.

I recently showed my chemistry class a Nova program, “Fabric of the Cosmos,” featuring Brian Greene (the physicist who gave us string theory). It was entitled “Space” and the upshot was that space was not the vacuum we thought it was. (By the way, this and what follows is not news to any student of non-duality – but I digress.)  Turns out that space is teeming with energy or ‘activity’ as is the so-called “empty space” that comprises the atom.  My students were fine with all that, except when it came to the end of the show where it was suggested that physicists are now thinking that the universe is a hologram. Seems it has something to do with newly discovered properties of black holes. There was an audible silence after the show as they digested what they had just heard.  The idea is difficult to wrap your brain around. The implications are even more difficult to verbalize.

For me – I was thrilled. I’ve written about this idea, on this blog, based on Michael Talbot’s work, The Holographic Universe, which was published back in 1991. This blog entry was taken from a larger piece I wrote, published in November 2007 in the Aquarius (a newspaper published in Atlanta). You can check that out in their archives here.

These times we are living in reminds me of the early years of the 20th century when science was exploding with all the new ideas put forth by Einstein, Max Planck, Niels Bohr etc. Quantum mechanics was born during that exciting time and changed how we view the world. I feel that we are on the precipice of a similar radical revision of our view of reality. I felt it back in the early ‘90’s when I read about the work of physicist David Bohm, who is mentioned in Talbot’s work. That was also around the time I read Fritjof Capra’s “Tao of Physics.”

Ideas that have been discussed and bandied about outside of the mainstream over the past few decades are now suddenly being hailed as “new” discoveries. I applaud those men and women who risked and endured being ridiculed and laughed at in order to present the world with other possibilities. In the words of Epictetus, “If you want to improve, be content to be thought foolish and stupid.”